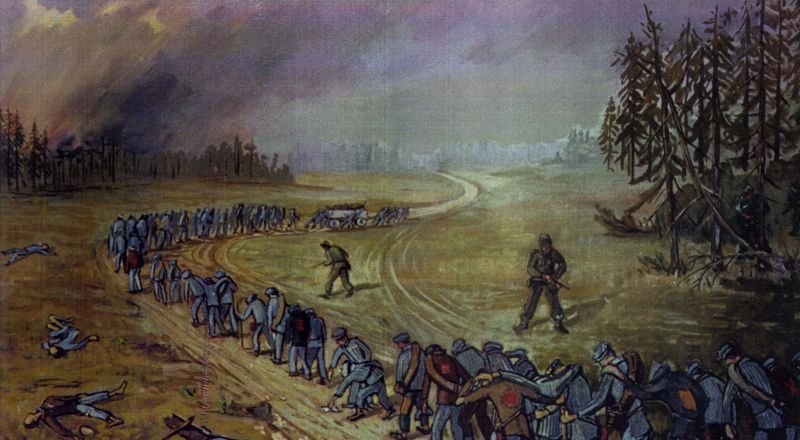 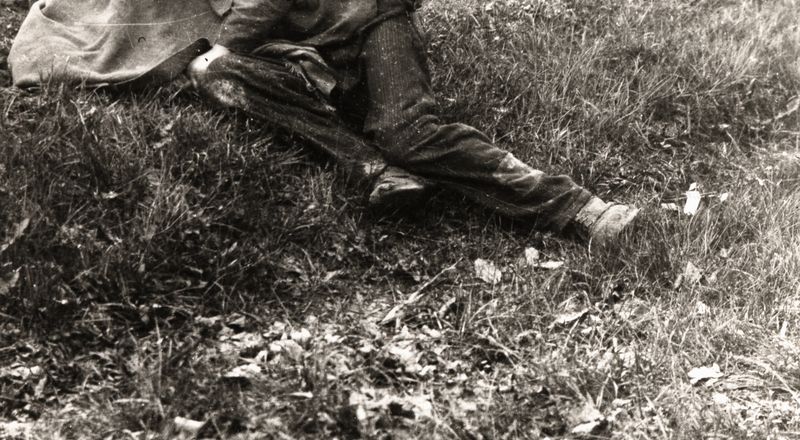 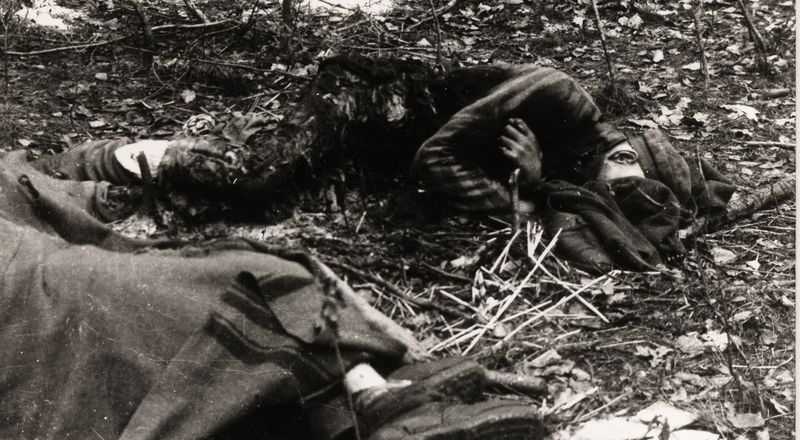 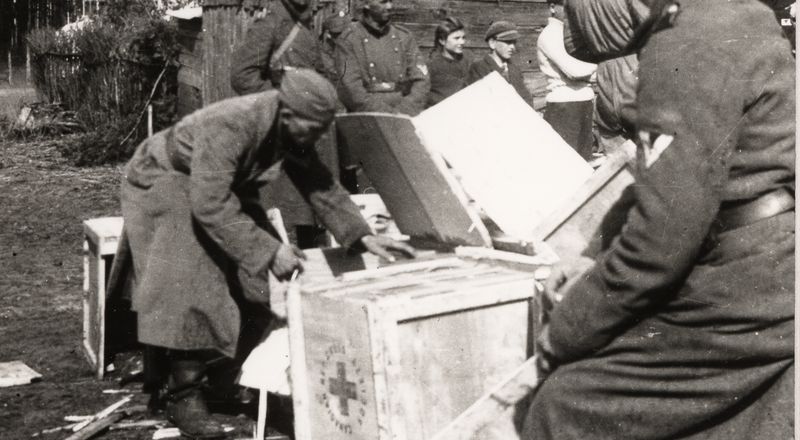 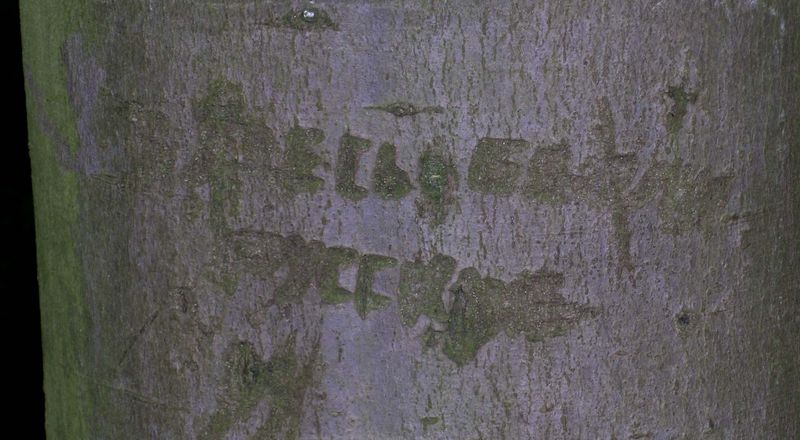 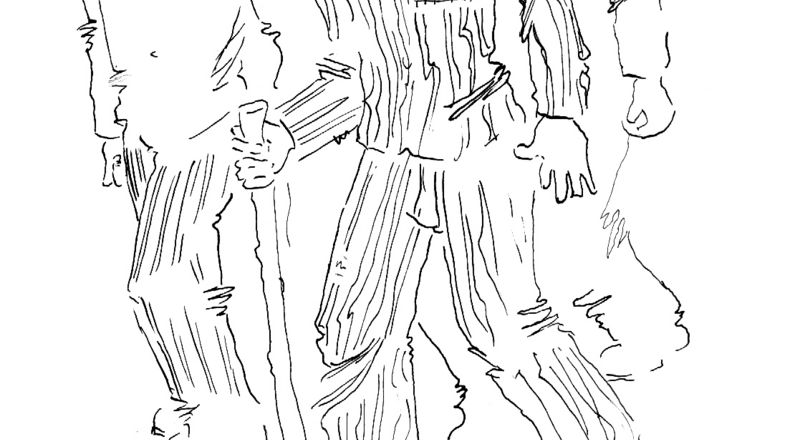 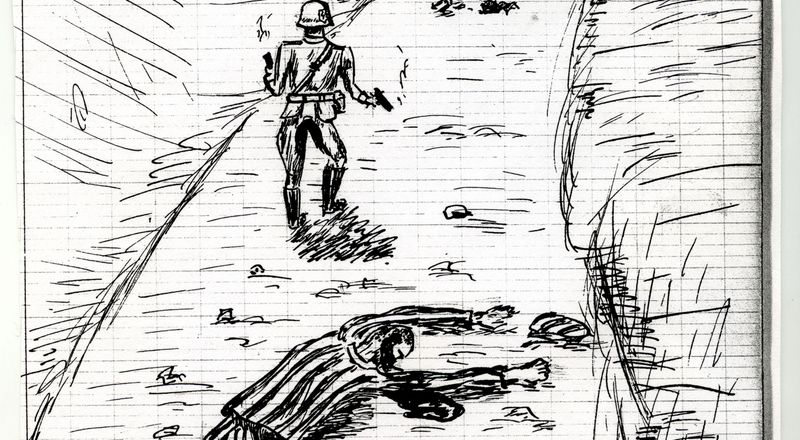 The clearance of Sachsenhausen concentration camp

So close to liberation, the clearance of Sachsenhausen concentration camp cost more than a thousand inmates their lives. On 20 and 21 April 1945, as the front approached, more than 33,000 inmates, among them women and children, were forced to march on foot from Sachsenhausen towards the north-west. For most of them, the march ended with their liberation by Soviet and American forces between 2 and 4 May in the Parchim – Ludwigslust – Schwerin area, some 200 kilometres away from Oranienburg. For many survivors of Sachsenhausen concentration camp, the Death March and the provisional camp in the Below Forest remain to this day among their most vivid memories of their time as concentration camp inmates.

As early as the Autumn of 1944, “Reich Leader SS” Heinrich Himmler and the commandant of Sachsenhausen concentration camp, Anton Kaindl, were already discussing the clearance of the concentration camp close to the “Reich” capital city. The SS leadership’s original intention was to kill all concentration camp inmates in a massive murder operation involving dropping bombs, mass shootings or loading them on to ships and sinking them. But as the Red Army reached the River Oder in early February 1945, all these plans were dismissed as being technically unworkable. Instead, the First Camp Doctor was given the order to select all the inmates in the infirmaries and the so-called “Schonungsblocks” (blocks for the very weak) who were ill and unfit for marching and either to deport them in large convoys to the Bergen-Belsen and Mauthausen death camps or to murder them in the industrial yard of Sachsenhausen concentration camp. The rest were to be forced to march to the north-west along the narrow corridor remaining between the front lines of the Western Allies and the Red Army.

The clearance of the camp started on 20 April 1945. With completely inadequate clothing and food and weakened by their internment in the concentration camp, the inmates trailed through northern Brandenburg and Mecklenburg under the eyes of the local population. They had to march up to 40 kilometres each day in cold, wet weather, and sleep in overcrowded barns or in the open air. Anyone who was unable to march any further was shot or beaten to death by the SS. The same fate threatened to befall those inmates who tried to get food or water at the side of the road. Only a very few inmates managed to get away from the heavily guarded columns and escape. The columns passed through many towns and villages and marched on both forest paths and populated country roads, where they encountered refugee treks and retreating Wehrmacht soldiers. Most spectators reacted with indifference, and only a very few offered any help.

The provisional camp in the Below Forest

The columns moved along various different routes towards Wittstock. In the Below Forest to the north of the town the SS corralled more than 16,000 concentration camp inmates on 23 April 1945 and the following days into a provisional camp partially fenced in with barbed wire. SS guards surrounded the section of the forest and left the people within to their own devices without any food, water or shelter. The guards were housed in a shepherd’s hut opposite the forest camp. For a short time, the camp commandant, too, was quartered with his staff in the nearby village of Below. After several days had passed, International Red Cross workers arrived, distributed food parcels and managed to get an emergency hospital set up in barns in the vicinity. The inmates in the emergency hospital were liberated by the Red Army on 1 May.

But most of the inmates were forced to carry on marching further to the north-west in columns that left the forest camp on 29 April. Near the town of Crivitz the bulk of the Sachsenhausen inmates met up with women from Ravensbrück concentration camp, whose death march had brought them there via the Malchow satellite camp not far from Below. Other columns were forced to march towards Ludwigslust. The closer the front lines approached, the more the order of the march disintegrated as more and more of the SS guards slipped away. Many inmates were liberated simply by being abandoned by the SS in the middle of the forest. But they were not in safety until the Eastern and Western Fronts met on 4 May on the Stör Canal near Raben Steinfeld. Depending on where the various groups of inmates were between 2 and 4 May, they were liberated either by the Soviet or the American army.